Vertigo is a strange phenomenon in which a person feels as though there is movement happening around them or to them, but actually there is no movement at all. It is an encompassing experience that may feel like spinning, rocking, or rotating. And while it may seem serious, it is harmless. The only danger lies in if the onset occurs to a person at a vulnerable time such as while they are driving or climbing a ladder, which could result in a serious accident. The episodes can last for hours or even days, requiring you to step back from your usual day-to-day activities. Interestingly enough, vertigo is not a condition itself, but is the symptom of a condition, such as an injury to the head or neck.

The Balance System and the Ear

When sound waves travel through the outer ear canal to the eardrum, the sound vibrations are recognized by the inner ear. Next, the vibrations reach the cochlea and then arrive at the vestibular nerve, whose role is to relay signals to the brain. The inner ear is also made up of semicircular canals positioned at right angles to each other. They are lined with tiny cells that act like a gyroscope. A combination of the sound waves and the sensitivity of the hair cells within the canals, provide constant and immediate feedback to our brain about our body’s position and balance.

We’ve already clarified that vertigo is a symptom; however, it has its own set of characteristics that it is known by. For example, the spinning sensation is the most commonly known one, which can be triggered from rolling over in bed or simply moving the head side to side. In some cases, the false sensation of movement can spur a person to become nauseated and vomit. Another vertigo symptom is called nystagmus, which is abnormal eye movement.

To learn more about the connection between head and neck injuries and vertigo download our complimentary e-book How to Naturally Relieve Vertigo without Drugs by clicking the image below. 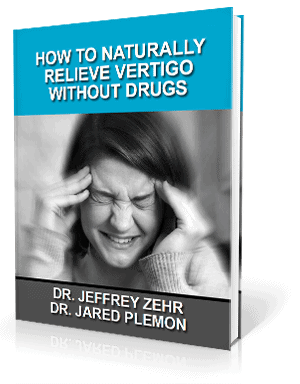 The few serious conditions that exhibit vertigo as a symptom are a potential stroke and other brain or nervous system problems, but these are very rare. These episodes would also include weakness or incoordination of one side of the body, and they require immediate professional help.

Vertigo can happen for multiple reasons. The two types of vertigo that exist are categorized by why it is happening:

Meniere’s disease is a primary cause of vertigo. Other symptoms include the following:

Here are some other reasons for the onset of vertigo:

Methods for Dealing with Vertigo

In most cases, if you turn to your doctor for help with vertigo, he or she will prescribe some sort of medication to help alleviate the symptoms. Usually the doctor will not pursue why you have developed the symptom. This is problematic because vertigo medications are not recommended for long-term use.

If you believe your vertigo symptoms are associated with BPPV, then doing the Epley maneuver can bring significant relief by moving the calcium crystals that have become misplaced in your inner ear back to their proper place. You will want to get the help of a professional for these exercises, to ensure you are doing them accurately.

Another way that many vertigo sufferers have been finding tremendous success is with the help of upper cervical chiropractors. This is a specialized niche of chiropractic care that focuses on the two uppermost vertebrae of the spine. We would like to explain why this method works so well, but first we will share several documentations of its success.

In two different research studies of vertigo, there were a total of 199 patients with a majority of the patients suffering from Meniere’s disease. As previously mentioned, vertigo is the primary symptom of Meniere’s and is also reported as the most bothersome.

In the first study, 139 people with Meniere’s were evaluated, each one reporting a number to rate their vertigo symptoms. On average the numbers were at an 8.5 out of 10 (with 10 being the worst). After getting care from an upper cervical chiropractor for 6 weeks, they reported a decrease in their symptoms to a mere 3 out of 10. Over the next two years of receiving care, these numbers continued to drop down to an average of 1.4.

In a second study, 60 patients were observed while receiving treatment for the course of 6 months. Out of the 60 patients, 48 reported being free of vertigo, while the remaining 12 reported a significant improvement in their vertigo. For some patients, it only took one month for dramatic results to occur!

The link between all 199 patients from the studies above is that they all had some type of head or neck trauma that caused a misalignment in the bones of the upper cervical spine. At Zehr Chiropractic in Norton Shores, Michigan, the methods we use are similar to those used in the studies. We apply a gentle and precise adjustment to encourage your bones to naturally return to their proper alignment. The benefit of this type of adjustment is that the correction stays for longer and encourages the body’s healing process. In most cases, correcting the misalignment results in an improvement or complete alleviation of vertigo symptoms.

To schedule a complimentary Atlas Orthogonal consultation call 231-780-9900 or just click the button below.

If you are outside of the local area you can find an Upper Cervical Doctor near you at www.uppercervicalawareness.com.

Jeffrey Zehr's Practice has been recognized as one of the top Norton Shores Chiropractic practices.
Verified by Opencare.com

We use cookies to ensure that we give you the best experience on our website. If you continue to use this site we will assume that you are happy with it.OkPrivacy policy